Can’t remember the number of times I’ve said I’ve been away because I’ve been busy, but this time it’ll be different. Well it probably won’t be different, it looks like I’m destined to be an inconsistent blogger!

It’s now been three months since I arrived in the Netherlands for my new job and I’m enjoying it a lot here. The pace is much faster in the group than I’m used to but I’m enjoying the buzz of lots of interesting things getting done. Now I’m more settled I’m hoping for a spectacular return to blogging - there’s certainly enough to talk about here!

The Dutch are good at science#

In general the Netherlands has a fantastic history in the sciences. I was watching Carl Sagan’s Cosmos the other day (best telly ever made), he loved the Netherlands it would seem. There’s a whole episode where people dress up in pointy hats and reenact bits from Dutch scientific history.

I’m no historian so there’s no point making a huge list. Some notable greats though include Cristiaan Huygens, famous for the wave theory of light, he worked on telescopes and even the pendulum clock. The microscope was invented in the Netherlands, allowing the Antonie van Leeuwenhoek to discover “a universe in a drop of water”.

What about statistical mechanics?#

Closer to the focus of this blog, the name Johannes van der Waals is never far away. His theories allowed us to begin to understand why matter undergoes phase transitions.Two names that are important for us here in Utrecht are Peter Debye and Leonard Ornstein. 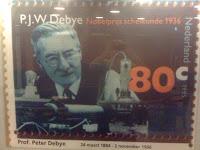 Peter Debye is another one of those names that just seems to pop up all the time. It’s littered through my thesis because of his work on phonons. Debye was professor at the university of Utrecht for a very short time. I believe the university didn’t deliver on his startup money so he left. The picture is from our coffee room in the Debye Institute. 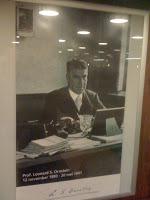 As well as working in the Debye Institute I also work in the Ornstein Lab, after Leonard Ornstein. For me his name is most famous from the Ornstein-Zernike relation in liquid state theory, however, I think he did a lot of varied stuff. He followed on from Debye at Utrecht in 1914 where he remained until 1940. Ornstein was Jewish and at the beginning of the war was dismissed from his position at the university. Only six months later he died. Seems to me it should be the Ornstein Institute, anyway, we also have his picture up.

So the Dutch weren’t too bad at science. The living ones aren’t too shabby either. So hopefully lots of interesting things to be posted in the coming weeks.