One of the things I love about colloids is just how visual they are. Be it watching them jiggling around under a confocal microscope, or the beautiful TEM images of crystal structures, I always find them quite inspirational, or at least instructional, for better understanding statistical mechanics.

Just to prove I’m on the cutting edge of science, I recently discovered another neat example from 1993. At the liquid matter conference in Vienna Roberto Piazza gave a talk titled “The unbearable heaviness of colloids”. As a side note there was a distinct lack of playful titles, maybe people were too nervous at such a big meeting. Anyway, the talk was about sedimentation of colloids.

Sedimentation is something I don’t usually like to think about because gravity, as any particle physicist will agree, is a massive pain in the arse. Never-the-less, my experimental colleagues are somewhat stuck with it (well, most of them). As is often the way it turns out you can turn this into a big advantage. What Piazza did, and then others later, was to use the sedimentation profile of a colloidal suspension to get the full equation of state, in fact the full phase diagram, from a single sample. 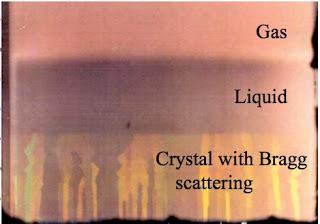 The nicest example is from Paul Chaikin’s lab (now in NYU, then in Princeton), where they used a colloidal suspension that was really close to hard spheres. They mixed a bunch of these tiny snooker balls in suspension, and then let it settle for three months. What they got is this lovely sample, with crystal at the bottom (hence the strange scattering of the light), and then a dense liquid which eventually becomes a low density gas at the top. It’s as though the whole phase diagram is laid out before you.

This is a very beautiful illustration, but it’s not the best bit. In the same way that atmospheric pressure is due to the weight of the air above you, if you can weigh the colloids above a particular point in the sample then you can calculate the pressure at that point. This is exactly what they did. There are many different ways to measure the density of colloids at a particular height, if you can do it accurately enough (which was the big breakthrough in Piazza’s 1993 paper) then you can calculate the density as a function of pressure. In a system where temperature plays no role such as this, this is exactly the equation of state (EoS). 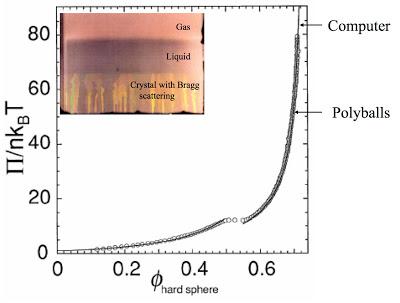 When compared with theoretical calculations for hard spheres the experimental data lies perfectly on the theory curves, complete with first order phase transition where it crystallises. This is really a lovely thing. EoSs are very sensitive to exact details, so in the same way that in my group we compare our simulation of the EoS to check our code, this showed very accurately that their colloids really were hard spheres.

So I think this is all very nice. I nicked the above images from Paul Chaikin’s website, I recommend having a poke around, there’s loads of great stuff (you really need to see the m&ms).