I’ve talked about this a lot before so I will only very quickly go back over it. The phase transitions you’re probably used to are water boiling to steam or freezing to ice. Now water is, symmetrically, very different from ice. So to go from one to the other you need to start building an interface and then slowly grow your new phase (crystal growth). This is called a first order phase transition and it’s the only way to make ice.

Now water and steam are, symmetrically, the same. At most pressures the transition still goes the same way – build an interface and grow. However, if you crank up the pressure enough there comes a special point where the distinction between the two phases becomes a bit fuzzy. The cost of building an interface goes to zero so there’s no need to grow anything. You just smoothly change between the two. This is a second order, or continuous, phase transition and it’s what I mean by a critical point.

As I’ve demonstrated before, one of the consequences of criticality is a loss of a sense of scale. This is why, for instance, a critical fluid looks cloudy. Light is being scattered by structure at every scale. This insight is embodied in the theory of the renormalisation group, and it got lots of people prizes.

A second feature of critical phenomena is universality. Close to the critical point it turns out that the physics of a system doesn’t depend on the exact details of what the little pieces are doing, but only on broad characteristics such as dimension, symmetry or whether the interaction is long or short ranged. Two systems that share these properties are in the same universality class and will behave identically around the critical point.

At this stage you may not have a good picture in your head of what I mean, it does sound a bit funny. So I’ve made a movie to demonstrate the point. The movie shows two systems at criticality. On the left will be an Ising model for a magnet. Each site can be up or down (north or south) and neighbouring sites like to line up. The two phases at the critical point are the opposite magnetisations represented here by black and white squares. 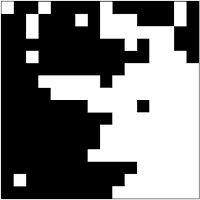 On the right will be a Lennard-Jones fluid. This is a model for how simple atoms like Argon interact. Atoms are attracted to one another at close enough range but a strong repulsion prevents overlap. The two phases in this case are a dense liquid and a sparse gas. 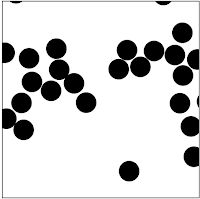 One of these systems lives on a lattice, the other is particles in a continuous space that are free to move around. Very different as you can see from the pictures. However, what happens when we look on a slightly bigger length scale? Role the tape!

At the end of the movie (which you can view HD) the scale is about a thousand particle diameters across containing about 350,000 particles and similar for the magnet. At this distance you just can’t tell which is which. This demands an important point: These pictures I’ve been making don’t just show a critical Ising model, they pretty much show you what any two-dimensional critical system looks like (isotropic, short range…). Even something complicated from outside of theory land. And this is why the theory of critical phenomena is so powerful, something that works for the simplest model we can think of applies exactly - not approximately - to real life atoms and molecules, or whatever’s around the kitchen.